MMORPGs are massive in so many ways. Across hundreds of games, they bring in 10 billion dollars a year and have audiences that expand well into the tens of millions. In just World of Warcraft, players have collectively logged more time than our species has spent evolving on this planet—over 6 million years. The best MMORPGs share the beautiful ideal that anyone from anywhere can become anything within the confines of these virtual worlds (and grind out some epic loot in the process). 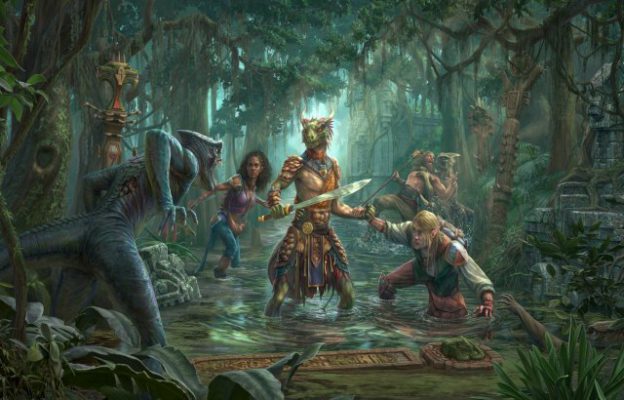 No other MMO has had a greater impact on the genre and the entirety of videogames as a whole quite like World of Warcraft. For that reason, putting it anywhere but first on this list just doesn’t feel right. Though it might be getting on in years, World of Warcraft continues to surprise with expansions. Taking players on a high-seas adventure to two new islands, Battle for Azeroth introduces some interesting new game modes like procedurally-generated Island Expeditions and Warcraft 3-esque Warfronts.

Whether you love dungeons, raiding, player-versus-player battles, or just exploring a wonderfully charming world, World of Warcraft has you covered. In Battle for Azeroth, Blizzard really drives this home with weekly activities like PVP Brawls with wacky rulesets like no gravity, Timewalking events that let you revisit old expansion dungeons for cool loot, and World Quests that help you accomplish something meaningful even if you only have 20 minutes to play.

The biggest flaw with Battle for Azeroth currently is its endgame gear system, which Blizzard has spent a good deal of time fixing. If you’re a hardcore player, it’s easy to feel the grind and frustration of a system that relies too heavily on RNG. That said, World of Warcraft’s endgame is still very diverse and fun—even if it has frustrating flaws. The path to its throne is littered with the bones of would-be usurpers, but World of Warcraft’s unparalleled zeal for bringing the world of Azeroth to life is a force to be reckoned with.

Korean MMOs are often negatively viewed as brutal grindfests, and while Black Desert Online doesn’t break that stereotype it does offer one of the most expansive crafting systems ever seen in the genre. While the active, combo-based combat is great fun, there’s dozens of career paths to take your character down in this dynamic sandbox MMO. You can be a merchant, a fisherman, or invest all your time into building a massive production empire of beer.

In Black Desert Online Each region is divided up into nodes that provide various resources. While properties in cities can be purchased and converted into blacksmiths, fisheries, or storage depots. Instead of doing all the hard work yourself, you can hire automated workers who level up and have their own innate skills to do the heavy lifting. It’s an intimidating system to learn when you’re just starting out, but the freedom it provides is unparalleled, and it’s unlike anything else in the genre. It can be just as rewarding to spend an evening tweaking your farms and leveling up your workers as it is taking down one of Black Desert Online’s brutal world bosses. And if that doesn’t suit your fancy, the node system is also the foundation for weekly guild wars, where guilds race to conquer various nodes for special bonuses—making BDO a great choice if you’re into PVP as well.

Final Fantasy 14’s journey has been a long road full of disappointment. Launching in 2010 to an overwhelmingly negative response, Square Enix refused to give up and rebuilt the whole game with a new team. The second iteration, A Realm Reborn, has done a better job of rekindling the love fans had for Final Fantasy better than any recent game in the series. It’s at once unflinchingly dedicated to following in World of Warcraft’s footsteps while also introducing a host of refreshing ideas—the best being the innovative class system.

Gone are the days of needing a new character for each class: Final Fantasy 14 let’s you swap between them whenever you please and there’s even room to borrow abilities between classes, just like in the classic Final Fantasy Job system. But Final Fantasy 14 isn’t just about combat, either. Its story starts slow but builds into a grand epic spanning continents across its three expansions, easily rivaling any of the classics like Final Fantasy 7 or 10. It’s a journey worth taking, if you have the time, but one thing to keep in mind is that 14’s endgame, while offering challenging and memorable boss fights, is scarce. Updates come at a steady pace, but you’ll run the same dungeons and raids dozens of times.

Amazon’s no-subscription-needed New World has changed a lot over the past few years of development, wavering between a proper MMO and just a really big multiplayer survival game. What’s never changed is the emphasis on massive PVP territory battles with 50 players on each side battling it out to control various forts and settlements scattered around the map.

Amazon is planning a closed beta sometime in April, but the actual game is planned to release in May of 2020.

Dual Universe is a massively ambitious sandbox MMO that’s like Minecraft meets No Man’s Sky—but everyone exists in one shared universe. It’s been in development for years, but this space-faring MMO has some cool tech under its belt, especially in how it plans to handle thousands of players in a small area at the same time.

If you’ve played sandbox survival games like Empyrean or Space Engineers, you’ll be fairly familiar with how Dual Universe works. Everything is destructible and how you can design vehicles and spaceships is completely up to you—as long as you have the resources and skills, of course. What’s cool, though, is that Dual Universe takes that familiar survival sandbox and drops it into a massive galaxy where entire player alliances can cooperate or fight one another. You can design ships and then sell blueprints to others, and there’s even a LUA-based scripting language so you can create in-game automation for machines (like autopilot protocols or advanced security systems) that can also be sold to other players. The ambitions behind Dual Universe are sky-high, but if it succeeds it might be the next big evolutionary leap the genre has been waiting for.

When you think of modern sandbox MMOs, there’s only one place to turn: EVE Online. The 16 years that EVE has been around could fill the pages of a textbook (actually, it kind of has)—but only if you’re studying How to Lose Faith in Humanity 101. Its reputation for being a callous, uncaring universe was forged over a decade of war, betrayal, and scandal. But that same spartan culture has also given birth to the kind of camaraderie you’ll never find anywhere else.

EVE Online is obtuse and complex as hell, and there will be times where you’ll stare at the screen, clueless of what to do. CCP Games gone to great lengths to make EVE easier to understand, but your best teacher will always be the sting of failure. The good news is that a few years ago EVE Online started offering a free-to-play option, letting you dive into its sandbox with a limited set of ships and skills to use. They’ve since expanded the program, giving free players even more choices of what ships to fly.

Those who persevere will find a whole galaxy of possibilities at their fingertips—and really, that’s always been EVE’s greatest accomplishment. It’s truly a living world where those with the will to rise to the top can find a way—even if that means using all those daggers in the back of the people who trusted them as a foothold.

When it comes to telling a great story in an MMO, the entire genre has something to learn from The Secret World. Not only does it abandon the generic fantasy aesthetic for a gritty contemporary one, it also ties so many different themes together—from the illuminati to vampires—that it shouldn’t make any damn sense, but miraculously it does. Not too many MMOs can say they’ve borrowed from the pages of Lovecraft and The Matrix and made it work. And like Lovecraft’s best, The Secret World is a bizarre page-turner that will have you digging deep to unravel all of its mysteries.

That love of a tale well told is best demonstrated in The Secret World’s investigation missions, which require donning your detective hat to search the internet for clues to decipher puzzles. You’ll pour over Wikipedia pages and through backwater websites hunting for that one piece that will make the whole picture come together. Earlier this year, The Secret World relaunched as The Secret World: Legends, revamping a lot of the game’s weakest systems like combat. The overhaul doesn’t necessarily fix everything, but it does go a long way to making The Secret World more enjoyable for newcomers.

Early in its life, The Old Republic had a kind of identity crisis that initially turned many away from playing. It wanted to be both a followup to the cherished Knights of the Old Republic while also giving World of Warcraft a run for its money and, at the time, did neither very well. But just like its setting, those days are long in the past and the Old Republic of today is far more enjoyable thanks to a refined focus on what it’s always done best: telling a great story.

Where most MMOs offer only a single overarching narrative, The Old Republic has eight different class stories to experience in the main game, and all of them are exciting and fun. Whether you want to sex your way across the galaxy as a seductive imperial agent or just murder everyone as a Sith warrior, The Old Republic has some of the best storytelling ever seen in an MMO. Bioware spent a lot of money making sure that the voice acting was top-notch and it really paid off. The Old Republic’s presentation is unparalleled.

In recent years, The Old Republic has expanded on that foundation with a series of expansion packs. The latest, Knights of the Eternal Throne, packs in a KOTOR-worthy cast of characters and a dramatic story that stands tall among the best tales ever told in an MMO.