This June Hitman 2, a stealth game by IO Interactive studio, will get some long-waited updates and brand-new content.

This month’s theme is “Greed Kills” and the headline is The Bank, a new sandbox location for Expansion Pass owners. Also, players will see a Challenge Pack, Featured Contracts, a Double Elusive Target, Escalation Contracts and more new additions.

On June 20 another Escalation Contract, the Unpalatable Termination, will be out: Here you’ll take off to Miami to finish three phases of escalation. The focus shall be 47’s potential with a shotgun.

When June 25th hits, expansion pass holders will finally get access to the Bank which has a new campaign mission called Golden Handshake. The bank is located in the USA and players will be able to walk around this sandbox figuring out how to take out the target.

On June 27 another escalation, The Aquatic Retribution (a trip to the aquarium, apparently) goes live.

Finally on June 29 there’s another legacy elusive target: Mr. Giggles, the entertainer, will be back in Marrakesh.

There’s also a roadmap you can read below. 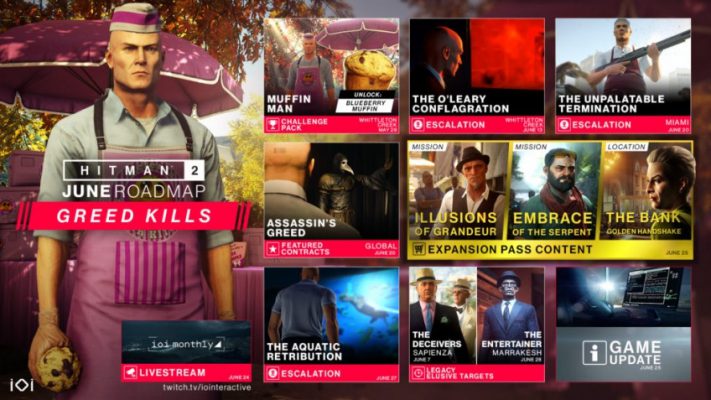