Knockout City bouncers received praise from players and journalists, so the authors decided to slightly change the business model.

Electronic Arts and Velan Studios initially offered to try the game for free for 10 days. The trial period has ended, but the game is still available to everyone. The authors decided to leave the opportunity to play for free with some restrictions.Thanks to this, the game was tried by more than 2 million players. A little earlier, the authors corrected the work of the player selection system, so that gamers are much less likely to get into matches with a high delay.

In Knockout City, it is available as a demo version and the need to buy the game will arise after reaching the 25th Street level. This will take about five hours, depending on your skills.

Perhaps, despite the high ratings (94% on Steam), the game has some problems with the number of participants in the battles, or the publisher is afraid of too sharp an outflow of users. 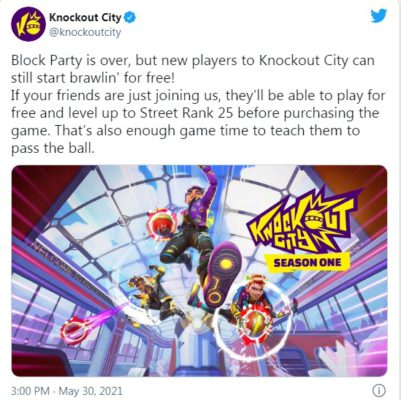 The game is available on PC (Epic Games Store and Steam), PS4, Xbox One and Nintendo Switch.