IO Interactive recently released the last of its June 2019 content for Hitman 2, and developers are already revealing plans for the next few weeks. Hitman 2’s roadmap for July arrived, and IO has a lot in store for the Jungle Music-themed month ahead.

The first one is an Escalation Contract which is already available today, July 4th. Called the Babayeva Dissonance, you will be tasked with taking out musicians to “stop the music”. There are three stages, and each one requires particular set of skills.

11th July will go live the new ‘I’m With the Band’ Challenge Pack in Santa Fortuna, with the violin to unlock as a new weapon, before ‘Tone Death’ Featured Contracts roll out on 18th July, swiftly followed by Legacy Elusive Target ‘The Badboy’ live in Sapienza on 19th July for ten days.

On July 25th another Escalation Contract will come called the Calvino Cacophony. Here you will have to become “the menace of Santa Fortuna” by blowing things up. Completing this escalation will earn you the Hot Summer Suit.

For a quick look at all the July Hitman 2 Roadmap check out the picture below: 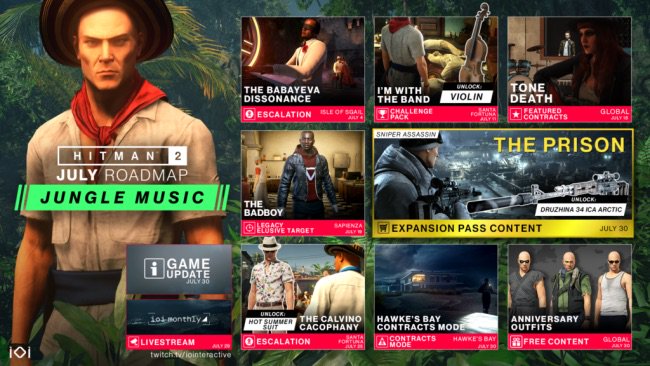 You also can watch the following video: