Xur is back in Destiny 2 this weekend, bringing a fresh stock of Exotics for you to fill out your inventory. It’s also the second weekend of the Trials of Osiris, so once again, this is an opportunity for you to snag new gear that can help you go flawless and reach the Lighthouse. Here’s what you need to know about Xur’s inventory and where you can find him.

Head to the Io, in the Giant’s Scar area, to find Xur. This week, his weapon offering is The Queenbreaker. Xur is selling the Oathkeeper gauntlets for Hunters; Titans can grab the Mk. 44 Stand Asides leg armor; and Warlocks get Ophidian Aspect gauntlets.

Start by loading in at the transmat zone in Giant’s Scar, then head northeast through the archway into the main area. Turn left and go toward the northern wall and look for a cave entrance. You’ll find Xur inside to the right of where you come in. 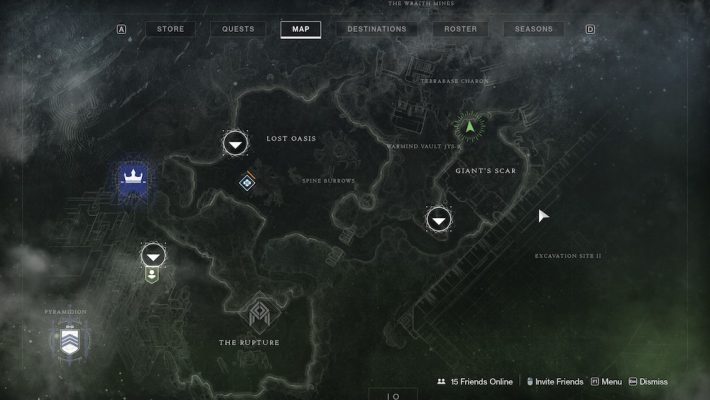 The Queenbreaker was a dominant linear fusion rifle in modes like Gambit when it was first introduced in the Forsaken expansion, but has since been tuned back a bit. Still, if you like reliable, long-range Exotics, this is a pretty good one for PvP situations. It’s not getting much use in Trials, but that doesn’t mean you can’t find some competitive use for it.

If Xur’s wares aren’t compelling for your Crucible or PvP loadouts, you can always roll the dice on a Fated Engram, which gives you a single Exotic from the limited pool of ones you haven’t already earned, for the price of 97 Legendary shards. All Exotic Engrams are now Fated Engrams, but you’ll have to level up your Season Pass or wait for a random drop to get some if you don’t want to buy from Xur. Since the new season has just kicked off, this is a quick (but expensive) way to get the Season of the Worthy’s new Exotic armors without having to wait for a random drop. Be sure to purchase it on the character who’s missing the Exotic, and note that you can only get one per week, so choose wisely which of your characters makes the buy. If you’re a PC or Xbox One player taking advantage of cross-save, you can now potentially get Wavesplitter from the Fated Engram as well, thanks to the fact that it’s no longer exclusive to PS4.

As Exotic weapons go, The Queenbreaker is pretty straightforward: it fires a powerful, long-range Arc bolt that can one-hit kill opponents you hit in the head. The weapon has more versatility than your typical sniper or linear fusion rifle, though. You can tune it with a closer-range or longer-range scope, and flip it to Hip-Fire Grip or Quickdraw, depending on your play style and the situation you’re facing.

Another simple one, Oathkeeper is for Hunters who like bows. The Exotic allows you to hold a bow charge indefinitely, rather than the arrow releasing on its own after a set amount of time holding it at the ready. It doesn’t sound like much, but for skilled bow players, Oathkeeper can give you a lot of versatility for planning your shots and landing them on unsuspecting enemies, especially in the Crucible. Unfortunately, the stat roll is lower than most on this item in Xur’s inventory.

For Titans, the Mk. 44 Stand Asides make melee-focused builds even more deadly. When you’re sprinting at full health with either Seismic Strike, Hammer Strike, or Shield Bash equipped, the leg armor grants you an overshield–making you even tougher to take down when you’re planning to melee someone in the Crucible. You also get some melee energy back when you make hits with your melee abilities. If you like running around PvP and taking people out with a shoulder or a knee, the Stand Asides can be extremely helpful.

Ophidian Aspect is one of those Exotics that’s great for Warlocks if you don’t have anything else you’d rather be using. It lets you ready and reload weapons much more quickly than normal, while extending your melee range. If you don’t have a build that requires a particular Exotic and you’re looking for a general boost, especially in Crucible, this is a good one to consider.