The psychological action thriller Alan Wake was released in 2010, but the game is still talked about. The game consisted of 6 episodes and was a mini-series. The psychological component of the game allowed the authors to “play” with the concepts of objective and subjective reality.

The main character of the game is the writer Alan Wake, who has recently been in a creative crisis. Having decided to take a break from the city, he and his wife come to the small town of Bright Falls. Here the game itself begins, and everything that happens around begins to resemble a bad dream.

Players are accustomed to the fact that in games only the perspective of the main character is available, but the numerous pages of the novel that they meet along the way describe not only what the player will face in a few minutes, but also reveal the relationship of the heroes who remain behind the scenes.

Alan Wake resembles horror, but there are absolutely no bloody scenes in it. The main gameplay is battles with opponents shrouded in mysterious darkness. And the first weapon of the hero against them is a flashlight, and only then a conventional weapon. However, just this gameplay, which at first seems unusual, gets boring pretty quickly. The further, the more monsters, the faster the gameplay, and the player cannot be afraid of a strange rustle in the bushes or fog. The game culminates in an impromptu concert by the fictional band Old Gods of Asgard (actually Poets of the Fall). However, as already mentioned, fights with monsters are quite expected and meager. It’ snot a shooter and you can use overpowered weapons like in Division 2, Destiny 2 and other similar games.This is not to say that Alan Wake plays poorly. One thing that cannot be taken away is that all of its few Remedy mechanics have been brought to shine. And the end result is a rather spectacular mystical action movie, which at a high level of difficulty forces you to constantly use the entire available arsenal. But the authors made the main emphasis on the plot.

Alan Wake unleashes its full potential in additional episodes. Having sent the hero into a gloomy looking glass, woven from rags of Bright Falls, the creators gave free rein to their imagination: here we jump from one fragment of reality hovering over the darkness of Lake Cauldron to the next, finding ourselves now on the bridge, now in the house; and here we are, like a squirrel in a wheel, running along a giant drum made up of Alan’s memories and set in motion by some unknown force. These two episodes “Signal” and “The Writer” are completed in a couple of hours, but the density of unique designs and intense battles there is higher than in the rest of the game. 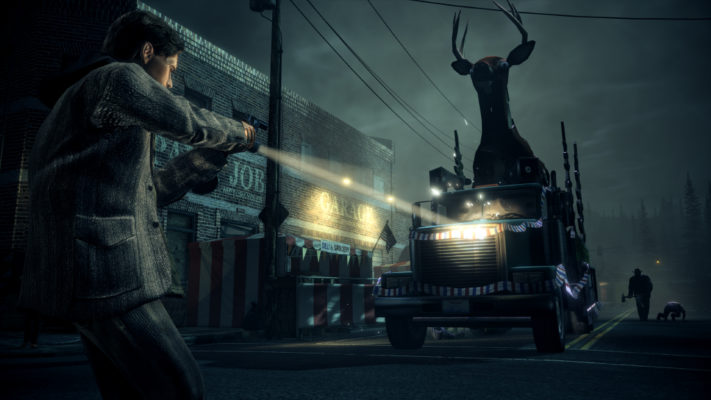 Alan Wake so absorbs all thoughts and attention that looking for flaws in it is the last thing you want to do. The game literally draws you into the mystical world. Alan Wake is a very interesting genre of games. It has a very strong and elaborate plot, which is the main highlight of the video game. The gameplay in Alan Wake contains very interesting ideas that are implemented at a high level. If you want to play a kind of game-series, saturated with darkness, mysticism and references to Stephen King and Alfred Hitchcock, then Alan Wake is an excellent choice even years later.